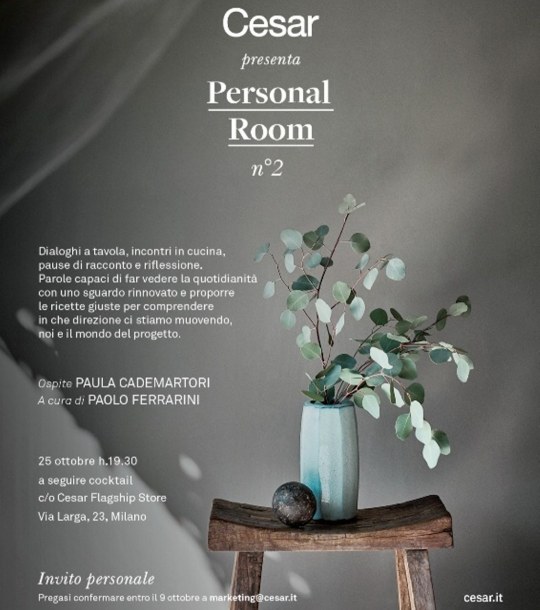 The second Personal room event, organised with the help of Paolo Ferrarini, took place on 25th October 2017 at 7.30 p.m.

“With the Personal Room sessions, we have decided to describe what is happening in the world of design, looking beyond product and interior design. And we decided to do that by favouring a very personal dimension, hence the title. We know that at home the best conversations often take place in the kitchen.”

The second Personal room event, organised with the help of Paolo Ferrarini, University lecturer and Italian correspondent for Cool Hunting magazine, took place on 25th October 2017 at 7.30 p.m. Writers, authors, musicians, designers, architects and graphic designers have been invited to talk in Cesar’s home, not necessarily on the subject of food or recipes. Their words have lead to the discovery of new things, aided the understanding of the present and offered the right recipes to sense the direction we and the design world are moving in.

The star of the second meeting was Paula Cademartori, designer of shoes and bags made entirely in Italy. Paula, the founder of the brand named after her which joined the OTB group in 2016 after having participated in Vogue Italia’s “Who is on next?” contest,  has been acknowledged as one of the most promising stylists on Italy’s creative scenario.

According to Paula, real luxury is a matter of detail. On her accessories, the delicate balance between utility and embellishment is symbolically struck by a metal buckle inspired by the Greek Pi symbol and personally designed by the stylist. It is also a refined trademark, a precious seal for each bag and a motif directly applied to the sole of her shoes.

Following the trend set at the first meeting, each content presented by Personal Room will become the chapter of a story, an idea to keep and take back home with you.