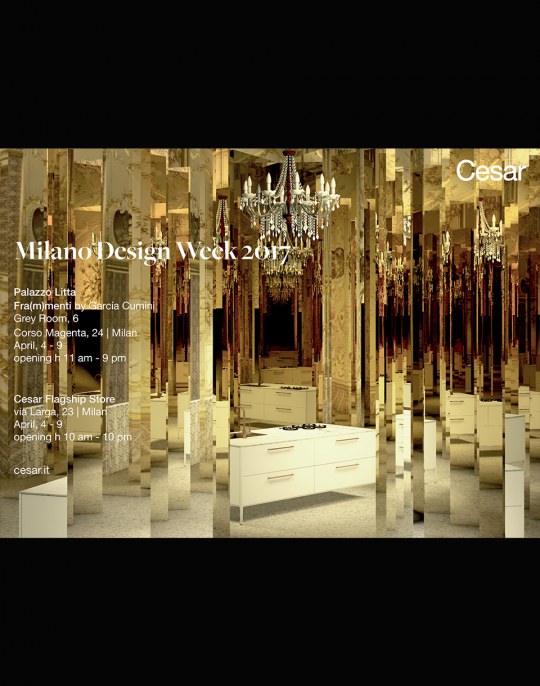 Cesar at the Milan Design Week 2017

From 4th to 9th April Cesar will be participating in the Milan Design Week, an unmissable, international event for the furniture and design industry.

Cesar will take part in this edition from two diffent locations: Palazzo Litta and the Cesar Flagship Store in Via Larga 23. Inside the Grey Room n. 6 in Palazzo Litta, one of the most fascinating examples of Lombard baroque, it will be possible to become part of the Fra(m)menti project by Garcia Cumini.

As suggested by the Italian word “Fra(m)menti“, a play on words that reveals an invisible interconnection of minds, this project connects, separates and unites. It is a clear metaphor of the multitude of links existing between two or more people and between people and objects. There is just one still point in the middle of the hall: Cesar’s UNIT kitchen, designed by Garcia Cumini. All around it a series of mirrors connects the product with the onlooker, inviting him to take a snapshot and share it on one or more social networks.

For this occasion the Flagship Store in Via Larga will present three new layouts containing an N_Elle kitchen island – a made over version of Elle – and the Maxima 2.2 and Unit models.

Come and see all our latest novelties!